Kwang Jin Kim is a fifth year PhD student at Michigan State University studying Chemical Engineering and Material Science. Over the last four years, he has worked in the Materials Simulation lab, lead by Dr. Yue Qi, to develop multi-scale simulation methods which are used in the atom by atom of design materials that are critically important for an energy efficient and sustainable transportation industry.

More specifically, Kwang Jin works on predicting the structural evolution and chemical degradation in Silicon-based anode materials using Density Functional Theory (DFT) and Molecular Dynamics (MD). He explains that while Lithium-ion batteries, with their granite-based anodes, have revolutionized the use of electronic materials and their application to electric/hybrid vehicles, further improvement in battery performance is possible by replacing the anode (negative electrode) component with still better materials. Due to their high capacitance, silicon-based anode materials are one such promising candidate for next-generation anode materials. 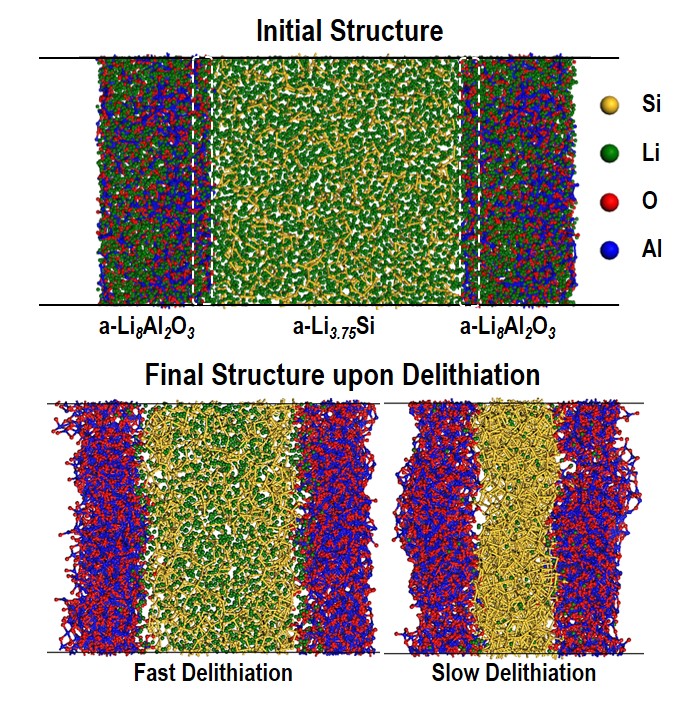 Kwang’s work has already resulted in a deepened understanding of the reaction of Silicon-based anode materials with Lithium (Li). His calculations and predictions of charge and discharge in Li-Si systems have been used to suggest guidelines for optimizing battery design in these systems. He hopes that his work in the Materials Simulation lab group will lead to fundamental insights into developing high capacity, long-lasting nano-structured electrodes and, more ambitiously, reduce the time and cost to develop future electronic devices and vehicles.

As an undergraduate at Hope college, Kwang performed electrochemical experiments to develop and analyze various coatings on battery electrodes. However, as a graduate student at MSU, he visited Dr. Yue Qi’s lab and became interested in studying these same materials computationally. With no prior experience in computer programming or coding, the main challenge for him became learning how to use computers as a scientific tool. He explains that, like one who performs a physical experiment, he needed to learn how to perform experiments with computers and use them to efficiently manage and analyze massive data sets, extracting the information buried in them.

Given his background Kwang says: “the learning barriers were extremely high but every time I needed help whether with a basic question or complicated coding process, HPCC was always there for support.” In addition to the availability of HPC resources, without which none of his research could be performed, Kwang says that the staff members were extremely helpful in his learning to use the computer as a research tool.

During his time at Michigan State, Kwang Jin has built meaningful relationships with his advisor, Dr. Yue Qi, and his lab mates. Working in the lab is a large part of his life at MSU, and it is important to him to surround himself with supportive colleagues.

Kwang Jin is certain that he wants to continue his computational research in energy related materials. In addition to studying batteries, he plans to investigate other energy storage and generation devices, including fuel and solar cells. “I believe replacing fossil fuels will become a major issue in the future, and no single storage system (battery or solar cell) will provide a solution, rather all of them will serve their purpose. Therefore, I want to possess a comprehensive understanding of energy-related materials,” says kwang Jin.