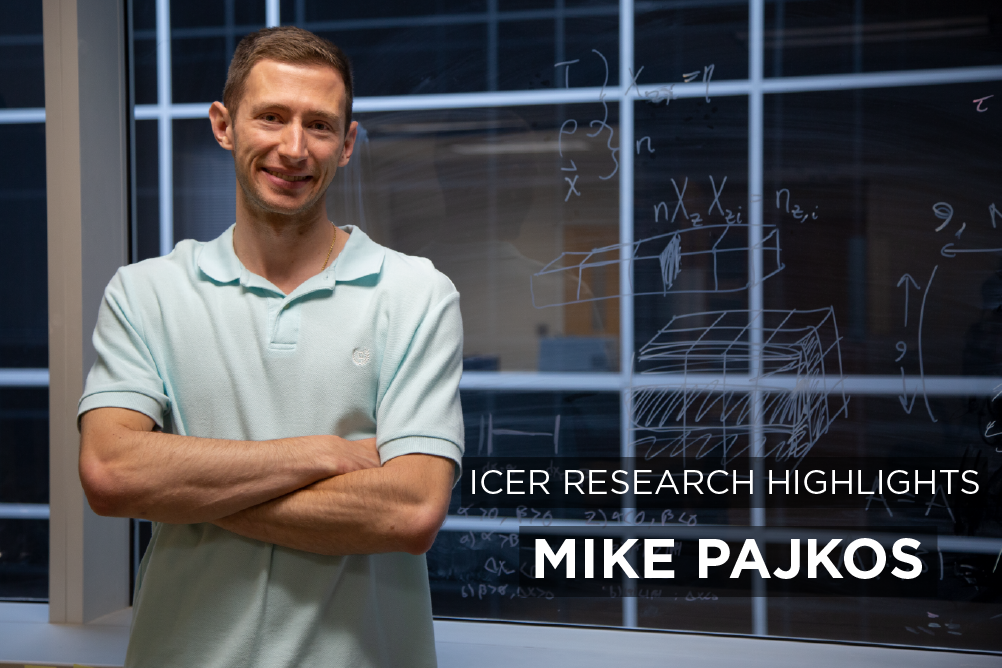 Much like the ripples in a pond, ripples in space known as gravitational waves (GWs) provide information to an observer about the source of the ripple. Large waves in a pond are likely caused by something large falling into the water. Similarly, the signals of GWs provide valuable insight into distant cosmic events. Dr. Mike Pajkos, who recently graduated with his dual Ph.D. in Astrophysics and Computational Mathematics, Science, & Engineering (CMSE) from Michigan State University, studies GWs to glean new information about our cosmos and the nature of physics itself.

“My work is a blend of studying outer space and allowing computers to perform ‘what if scenarios’ (simulations) of stars at the end of their lives,” explains Pajkos. “I look at how massive stars--roughly 10-20 times heavier than the Sun--explode. These simulations allow astronomers to better interpret signals that are measured at observatories around the world and in space as well.”

The impact of this work is broad in scope. Scientists can learn new kinds of physics hidden within exploding stars, known as supernovae. This research can also improve the chances of predicting and detecting stellar explosions. Beyond astrophysics, other industries benefit from the computational advancements driven by astronomy.

“The coolest parts about my work are the broader applications,” says Pajkos. “The computational techniques we develop in the field of astronomy constantly drive the construction of more advanced supercomputers--computers much more powerful than an at-home laptop.”

As a result, fields such as pharmaceutical development, jet engine design, and urban planning can use these advanced machines to propel their research and reduce the time to scientific discovery.

Pajkos first became interested in the science of the cosmos as an undergrad. It was not until graduate school that he began seriously studying supernovae and their GWs.

“Using physics to break apart complex problems into more digestible tasks was interesting, so applying those problem-solving techniques to studying the cosmos seemed like a natural fit,” says Pajkos. “The first direct detections of gravitational waves had only occurred a few years prior, and working on something timely appealed to me.”

During his time at MSU, Pajkos relied on MSU’s Institute for Cyber-Enabled Research (ICER) to provide the computational resources necessary for supernova simulations. The simulations are too mathematically intensive for an average computer.

“Capturing how supernova material 'sloshes around,' how new particles are created, and how gravity pulls everything together requires computing power beyond a traditional laptop,” explains Pajkos. “ICER has been valuable for conducting supernova research and teaching other researchers about high-performance computing as well.”

Having recently graduated, Pajkos is now turning his sights toward the postdoctoral research he will begin in the fall of 2022 at the California Institute of Technology.

“I will be exploring new aspects of supernovae, like what kinds of objects are left over after the explosion, developing new software to make use of resources like ICER, and developing astronomy outreach projects in the Los Angeles area,” says Pajkos.

Although it is hard to fathom the distance between Earth and the nearest supernova, Pajkos believes that understanding the impact of supernova research is important for the average person, regardless of their background.

“For the public interested in astronomy, supernovae have a drastic influence on how interesting objects like black holes form, or how galaxies--like the Milky Way--develop,” Pajkos explains. “For students in school, this research can be used as course material for introductory science classes to help garner interest in science for younger students; it also can support physics & astronomy majors in college, by providing research projects to apply course content.”

Zooming out even further, stellar explosions are responsible for life as we know it. Supernovae distributed essential elements like the oxygen we breathe and the iron in our blood. Pajkos comments, “It is almost poetic how something so far away gives all of humanity something in common.”