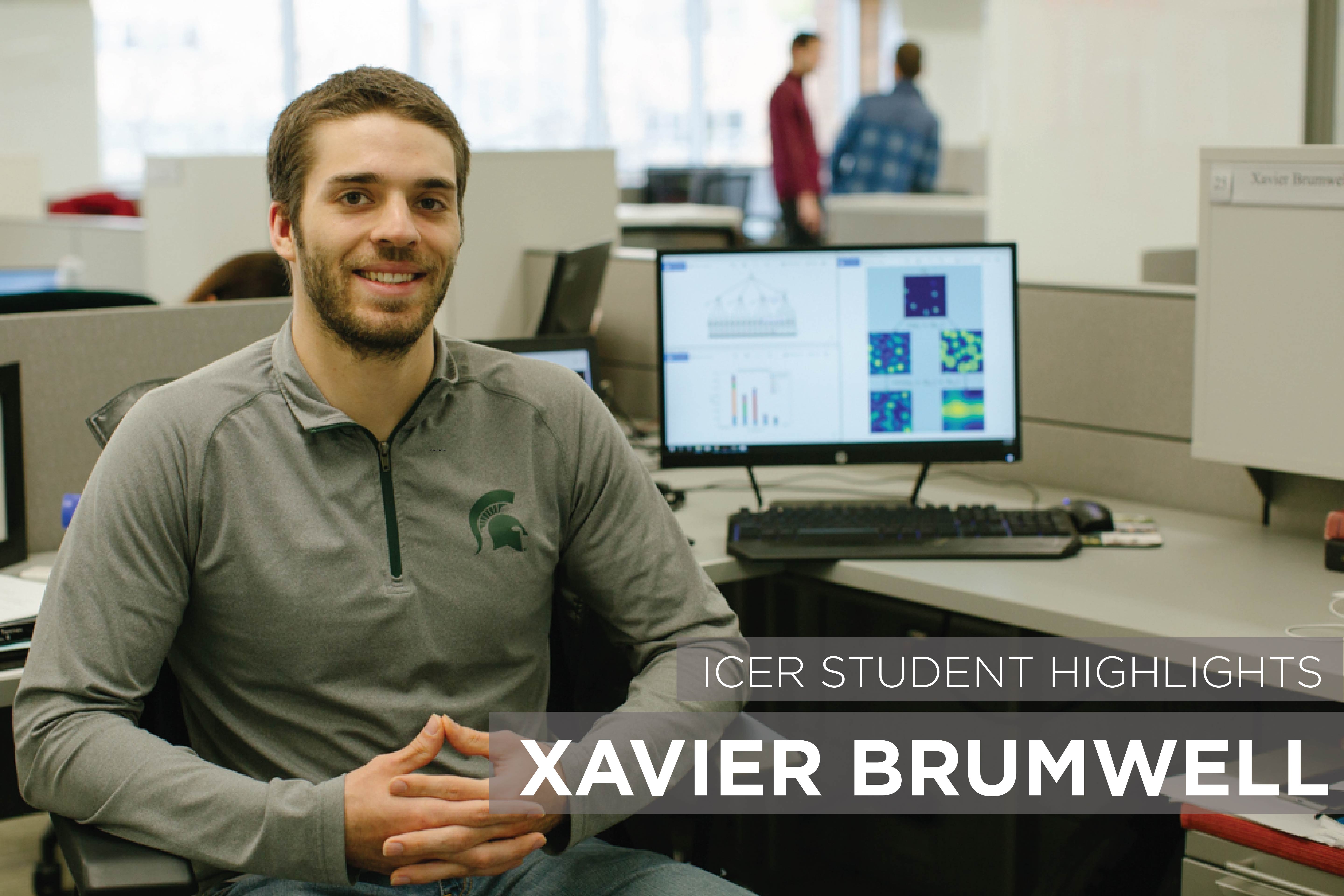 Xavier Brumwell is a graduate student in the department of Computational Mathematics, Science, and Engineering(CMSE) at Michigan State. Specifically, he works in the CEDAR lab under the advisement of Dr. Matthew Hirn. His studies primarily revolve around developing machine learning models for quantum chemistry and materials science.

Fundamentally, his research involves developing a model which can achieve the accuracy of quantum chemical methods at a reduced computational cost. To improve upon these pre existing methods and develop models that can compute properties with increased efficiency, Brumwell analyzes the materials using machine learning as opposed to DFT(density functional theory). He begins with 3D images representative of the materials’ structures. These images are then convolved against a series of 3D wavelet filters that encode different properties of the atomic system. The design of the filter plays a critical role in the modeling process. He stated, “a smaller filter might say how much of that energy is due to close interactions and a large filter might say if you look over an entire material state- how the full picture contributes to the energy.” In other words, examining close interactions as well as the entire material state can help determine where different portions of the energy originate from. The overarching model of filters that he uses is referred to as wavelet scattering.  All in all, he is working on increasing the efficiency of analyzing lithium silicon systems by approaching problems using this method.

Naturally, this process can prove to be quite challenging. Brumwell claimed that one of the most difficult aspects of his research involves the management of computation. He stated that “we have maybe 90 thousand systems and are computing 30 thousand features for each of them” and how “getting that to somewhere where we can claim it’s faster than DFT” is tough considering the hefty amount of computation involved. Compounded with that is the storage of computational jobs. Figuring out what is alright to discard as opposed to what needs to be kept is incredibly challenging. Fortunately though, Brumwell is able to take advantage of HPCC resources and said that they play a large role in ameliorating these difficulties. For example, HPCC allows the computational speed to be increased to over 500 jobs at once through parallelization whereas only around 5 could be done at a time if HPCC resources weren’t utilized during the studies.

This research is intended to be used to further streamline the processes of other, similar studies regarding the composition of lithium silicon materials. Ideally, it will lead to the ability to predict energies more quickly. Therefore, this will facilitate a more precise and faster exploration of the composition and properties of these materials. Brumwell additionally mentioned that the application of his work is most likely going to be applied towards the development and understanding of batteries.

Curiously enough, Brumwell’s interests did not initially lie in quantum chemistry. What led him to the project was an interest in machine learning. This interest grew from his awareness of machine learning becoming more prevalent in popular culture. While he had no chemistry background, the draw of working with machine learning led him into the project and caused him to discover his passion for the field he now works in. Now, he remains highly invested and dedicated to his research which will undoubtedly yield great benefits to the scientific community.