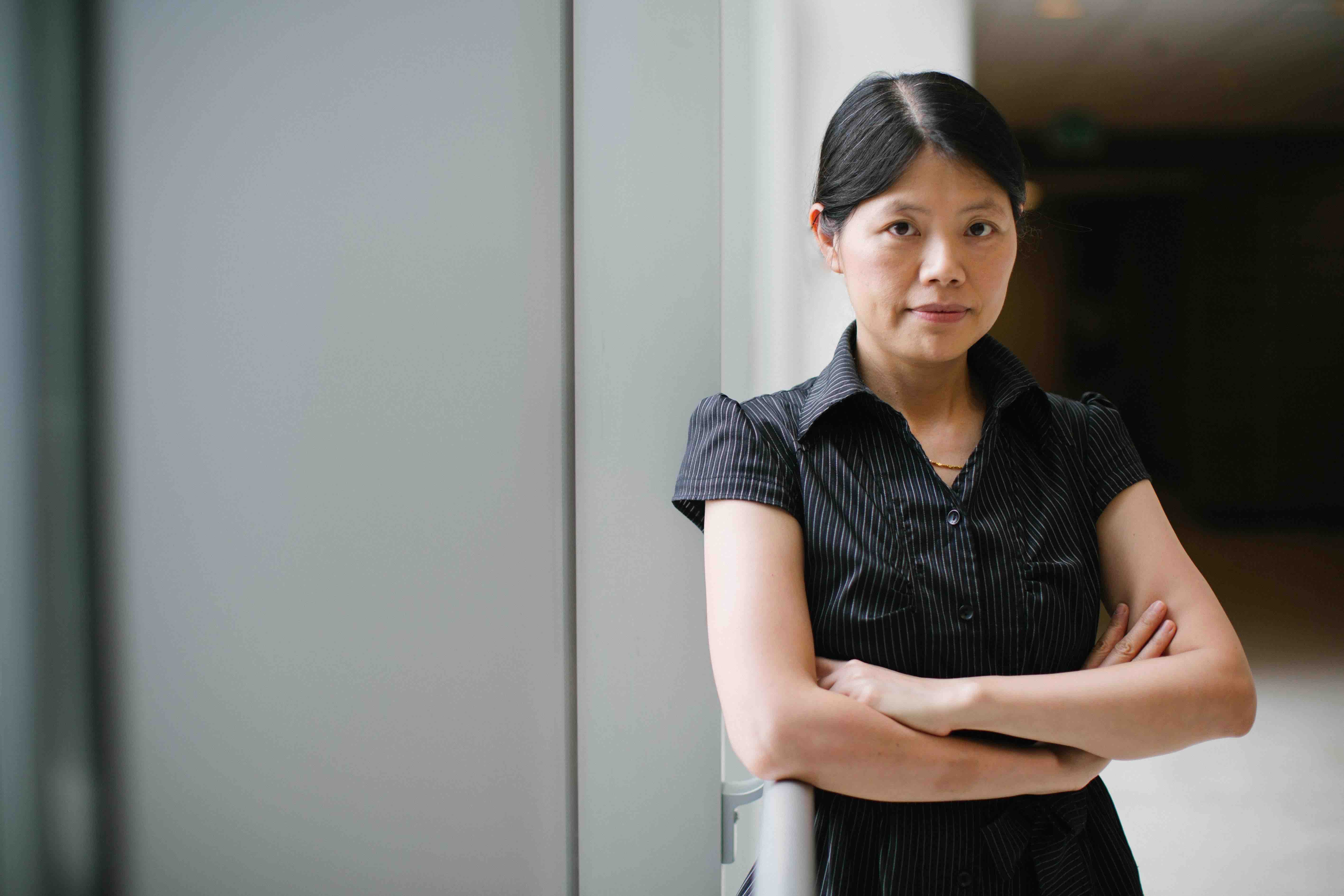 Huey-Wen Lin is an assistant professor in the Department of Physics and Astronomy, and Computational Science, Mathematics, and Engineering (CMSE) at Michigan State. Here, she studies the properties of the fundamental subatomic building blocks of matter. She takes particular interest in using HPCC to compute properties of particles that could not be calculated without the help of these high-performance computing systems.

Her primary project focuses on quantum chromodynamics (QCD), the theory describing the strong nuclear force[1] that allows nuclei to exist. QCD is similar to the electromagnetic force between electrically charged particles. Just as the electromagnetic force is carried by photons, QCD has carriers called gluons. While electromagnetism acts on electrically charged particles like electrons, QCD acts on color-charged particles called quarks. While electrons are familiar to us, quarks are more mysterious, because the strong nuclear force binds them so strongly that they can never escape from within protons and neutrons. Nonetheless, by making up those protons and neutrons in the nuclei of atoms, these elementary particles[2] lie at the heart of every type of matter we currently know and understand.

Lin’s research focuses on discovering what QCD predicts about how quarks and gluons make up larger particles. This is achieved through lattice QCD, a computer simulation of a tiny pocket of spacetime filled with quarks and gluons. Due to the strong couplings of the strong nuclear force, numerical simulation is one of the only reliable ways to study QCD for many interesting questions. However, the simulation of even a tiny quantum system requires immense computational power. A QCD problem might be equivalent to taking an integral in 100 million dimensions!

Therefore, for her research, Lin must take advantage of HPCC resources. She develops code needed for her studies and tests it on HPCC. Local computing resources like HPCC provide an essential testing ground for new ideas, methods and directions. A bold but risky proposal will find an improved chance of acceptance when backed by real-world prototyping on HPCC. For example, one major application of QCD is to determine the parton distribution functions[3], which describe the structure of the nucleon and how it’s made up from quarks and gluons. Quark distribution functions are now often studied using lattice QCD, but gluon distribution functions are more difficult, numerically “noisy”. This is frustrating, since gluons are expected to play a more substantial role in the formation of matter than quarks. To study this experimentally, the United States may build an Electron-Ion Collider. Such an effort must be equalled by progress in theory, and Lin will move these studies forward through new analysis ideas tested on HPCC.

Lin has long been passionate about elementary particles and broadening our knowledge of what exactly they are and how they operate. She not only does this through her own incredible research, but also through the efforts she’s made to teach others about gluons, quarks, quantum chromodynamics, and lattice QCD. In tandem with teaching physics courses at MSU, she organized a summer school and spearheaded the development of a mobile game, Quantum3, which educates young people about QCD through the medium of a fun match 3 game[4]. All in all, Lin’s passion, skill, and extensive knowledge is evident in all of her work at Michigan State.

[1]Strong nuclear force: strong force is one of the four fundamental forces of nature that describe our universe. The others are weak force, electromagnetic force, and gravity. Strong force holds quarks together to make protons and neutrons and also holds these particles together to make the nuclei of atoms. Our theory of the strong interactions is called “quantum chromodynamics” or “QCD”.

[3]Elementary particles: particles even smaller than protons, neutrons, and electrons.

[4]Match 3 game: a type of casual puzzle game where the user manipulates tiles to match together three identical elements.