Cutting the ribbon on Laconia 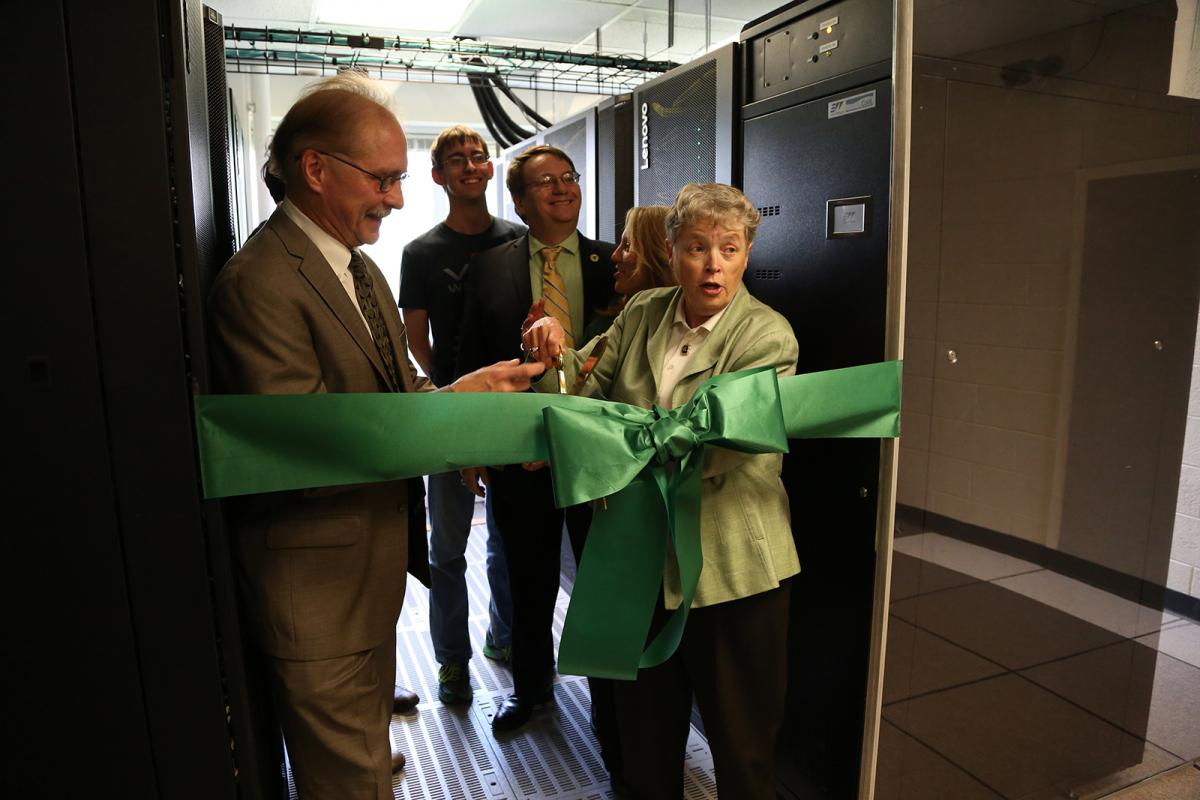 Last week, Michigan State University cut the ribbon on Laconia, its new $3 million supercomputing cluster. Laconia is the fastest high-performance computing system on MSU’s campus to date, and is expected to bring campus researchers together from multiple departments and disciplines.

“It’s an exciting time for the computational sciences at MSU,” said Kennie Merz, Director of the Institute for Cyber-Enabled Research (iCER). “Our researchers are poised to tackle transformative problems ranging from the discovery of new drugs to understanding the universe we live in. With the creation of the Computational Mathematics, Science and Engineering Department last year and with the installation of this Top 500 supercomputer, the computational sciences at MSU have never been stronger.”

In her remarks at the cluster’s ribbon-cutting ceremony on June 10, MSU President Lou Anna K. Simon highlighted the value of MSU researchers in driving discoveries in the computational sciences.

“The real power (of Laconia) will come in the intersections (between disciplines) and embracing the messiness that comes from that,” Simon said. “The languages of science and discovery aren’t always the same. They need a translator, and sometimes out of that comes a new language that is adopted and becomes the norm. That’s part of the value of the messiness. It takes special people with special passion to see the power of that.”

“MSU continues to place increased importance on supporting transformative research,” said MSU Provost June Pierce Youatt. “At a time when there is an ever-growing need for bigger and faster computer processing tools, the HPC resources available through facilities like iCER allow researchers to continue to push the boundaries of knowledge, focusing their efforts on research. Laconia puts unparalleled computer power into the hands of MSU’s top researchers. Investments like this allow us to remain competitive in an era when Big Data dominates research capabilities.”

Dr. Thomas Glasmacher is the director of MSU’s Facility for Rare Isotopes and Beams (FRIB), the $730 million facility that was funded in part by the National Science Foundation and the U.S. Department of Energy. Dr. Glasmacher emphasized the importance of HPC resources for the research partnership.

“The Facility for Rare Isotopes and Beams depends on world-class scientists to advance the search for answers to fundamental questions about nuclear structure,” Dr. Glasmacher said. “Scientific exploration with rare isotopes has reached the point where certain questions can only be answered with high-performance computing. Laconia supports the cutting-edge research of FRIB and helps attract researchers to our campus who will address the kinds of questions that can't be answered by traditional experimentation or analytic theory.”

Laconia was recently ranked #205 in the Top500 list, a global ranking of the fastest supercomputing systems. It also made #30 in the Green500, which evaluates supercomputers by their energy efficiency. Achieving this designation is due in part to its closed-loop system, which uses recycled water to cool the cores. But the cluster’s value extends beyond its performance capabilities — its power, speed and energy efficiency present increased opportunities for research collaborations across MSU.

“This supercomputer has tremendous value for MSU for a variety of reasons, not the least of which is enhancing grant applications,” said Dr. Neal Schmitt, Interim Dean of the College of Social Science at MSU. “I’ve seen social science researchers use (the supercomputer) for studies ranging from mapping cognitive processes to evaluating spatial analyses. Almost every discovery has Big Data applications.”

"This new system significantly increases our computing capacity,” said Dr. Leo Kempel, Dean of MSU’s College of Engineering. “It is a powerful tool for enabling our researchers to study vast data sets and explore millions of variables to find efficient solutions. It helps us to attract brilliant, young minds and gives them the resources for collaborations that open doors to new applications and discoveries.”

Dr. Sean Couch, a professor in MSU’s Computational Mathematics, Science and Engineering Department (CMSE), plans to use Laconia in his DOE-funded project, the Supernova Sensitivity Machine, to run simulations of supernova explosions.

“Supernovae create most elements in universe, but we still don’t understand the whole process,” Dr. Couch said. “We plan to use Laconia to carry out a lot of mid-scale calculations. I’ve really been waiting for Laconia to come online to do some serious stuff.”

Dr. Couch has been with MSU for one year, and says the supercomputer was a big part of his decision to come to the university.

“Having a resource that’s flexible, dynamic and locally available is critical for my research,” Couch said. “I wanted to come to a university that had this kind of institutional resource, and HPCC’s existence was absolutely a part of my decision making process.”

Laconia doubles the number of cores available to MSU researchers, from 7,500 to 15,000, and has a peak theoretical performance of over 700 trillion floating point operations per second (TFLOPS). Each node is about two to three times faster than the previous generation and an order of magnitude faster than the systems that were replaced; any two nodes can communicate with each other in less than one millionth of a second. That speed plays a crucial role in reducing the meantime to research.

“(The availability of Laconia) frees me from having to build, administer and maintain my own computing cluster, allowing me more time to focus on science,” said Dr. Alex Dickson, a buy-in user with a joint appointment in MSU’s Biochemistry and Molecular Biology and CMSE departments. “Since my work is primarily computational, large-scale computing resources are the cornerstone of the work that we do, and we need resources that are powerful, dependable, and responsive. HPCC and the iCER staff were a great selling point in my decision to come to MSU, and a year later I am very pleased with my experience. Laconia will be a great step forward, and will allow my growing research group to tackle more ambitious projects, and answer more difficult questions.”

MSU physics and astronomy professor Dr. Tyce DeYoung uses the supercomputer to analyze data gathered at the IceCube Neutrino Observatory at the South Pole. Dr. DeYoung is the Deputy Spokesperson of the IceCube Collaboration, which contributes to the operation of the observatory and is responsible for the analysis and publication of data recorded by the observatory.

“The graphics processing units (GPUs) that are part of iCER’s accelerated nodes are as much as 150 times faster at this than regular computer central processing units (CPUs), so iCER is a tremendous resource for us,” said Dr. DeYoung. “iCER’s support staff and system administrators allow us to focus on the science we’re doing, rather than worrying about maintaining all that computer hardware. (The supercomputer) was certainly a part of my decision (to come to MSU).”

Other voices:
Dr. Andrew Christlieb, Chair of MSU’s Department of Computational Mathematics, Science & Engineering:
“Having a supercomputing cluster at MSU has enabled us to hire three world leaders in lattice quantum chromodynamics, an emerging field that relies on high-performance computing to achieve its discoveries. I use the cluster in my own research, and I can absolutely say it’s a vital resource. It’s one of the key building blocks that has allowed CMSE to foster a dynamic, interdisciplinary environment here on campus.”

Dr. Junlin Yuan, MSU Department of Mechanical Engineering:
“(My research) typically includes up to 100 million degrees of freedom, requiring the latest supercomputers. The accessibility to a local cluster was one of the reasons I joined the MSU Mechanical Engineering department in 2015. The staff in iCER has been extremely helpful in code optimization, cluster usage, and allowing me to start data collection in full speed. With the new cluster, I expect to simulate problems with larger degrees of complexity, such as strongly non-equilibrium boundary layers with surface irregularity.”

Dr. Matt Hirn, CMSE:
“I develop new multiscale machine learning algorithms. My research emphasizes both underlying mathematical theory, as well as applications in fields such as medicine and quantum chemistry. I bought in (to Laconia) to push the applied side of my research. For example, in quantum chemistry we would like to develop and apply these methods on a large scale, in an attempt to push the boundaries of what’s possible for new materials design.

“I’m very pleased that (Laconia) is here, and I believe it will open up several research avenues. The iCER team has been very helpful in getting me acquainted with the platform, and also putting me in contact with other computationally focused faculty with whom collaborations may be possible.”

Dr. Huey Win-Len, MSU Department of Physics & Astronomy/CMSE:
“Supercomputers are absolutely essential to my research. I study the strong interactions of the fundamental particles inside the nucleus, quarks and gluons. At this tiny scale, after more than a half-century of experiments, there are still plenty of mysteries to be solved. Although we think we know the right theory of quarks and gluons, doing calculations using paper and pencil has proved impossible; computer simulations turn out to be the best way to study it, and it takes a very large amount of power to study even a tiny nucleus. In addition to illuminating nuclear physics, our supercomputer research will also help the Large Hadron Collider and other experiments to search for new physics.

“MSU's strength in supercomputing was definitely a factor in my decision to come.  Being at an institution with a supercomputer has many advantages for my research. Not only is the hardware essential for doing my research, but having colleagues with computational interests provides opportunities to discuss the latest computing hardware and algorithms, and allows me to find collaborators to produce new ideas. It's great to be at an institution that supports and values computational research, and this university-level supercomputer says all that.

“I will be starting at MSU this summer, and I am very excited. I am excited to find out about the training classes at iCER to help students get started. Not many research universities can provide the resources to patch up the gaps that students tend to have in computer skills.

“Laconia will play an important role in trying out new ideas. Having a local supercomputer makes it much easier for myself, postdocs, and students to try new ways to solve problems and develop efficient codes without facing the long queues typical at national facilities. It will also be an important way to demonstrate ideas that will allow me to win awards at the national supercomputer facilities.”